Posted at 12:09h in Blog by Kate Williams
Share 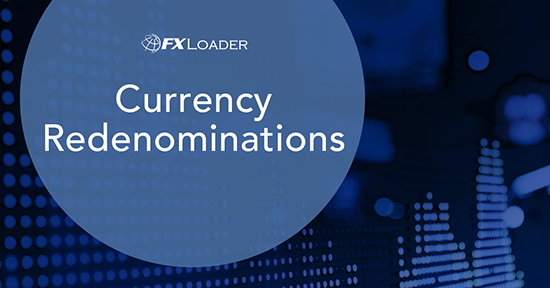 Most countries do not fix their currency rates at a particular value – their currency fluctuates in value depending on the market. But some countries choose to peg their currency so it is fixed against the currency of another country, often the US Dollar. Occasionally those countries may decide to redenominate their currency. This could be for a number of reasons, maybe as a result of inflation in that country, or perhaps because their economy is largely dependent on a commodity price, such as oil.

In December 2020 Iraq’s Central Bank announced it would devalue the Iraqi Dinar by over 20% in response to a severe liquidity crisis due to low oil prices. We saw the USD>IQD rate move from around 1190 to around 1460.

In January 2021 Libya’s Central Bank approved a single official rate for the Libyan Dinar in an attempt to fix an economy ravaged by nearly a decade of conflict. The new rate was set at 4.48 Dinars per US Dollar. Previously the rate had been around 1.31.

In January 2021 Cuba decided to end its decades-old dual currency system and have a single unified rate of 24 pesos per US Dollar. The Convertible Cuban Peso (CUC) will be removed from circulation; CUP will be the single currency code.

How do rates providers deal with redenominations

Rates providers rely in turn on rates sent to them from upstream sources, so we typically see providers react to currency redenominations at different speeds. Most providers have checks in place so that they can filter out any “bad data” from their upstream sources. Generally these work well on a day-to-day basis, but can cause issues when a large rate variance is genuine – because the genuine rates are filtered out. When this happens it is necessary for the provider to investigate whether the movement is genuine or not, and this can take several days.

How can FXLoader help during redenominations

At FXLoader we pull thousands of rates each day from many different providers and we have variance alerts which flag up any large movements in rates compared to the previous day. Thus, we are often aware of currency redenominations before your chosen rate provider – we regularly communicate large movements in rates to the providers in order to help them (and you) keep your rates up-to-date as much as possible.

How can I get more information on this subject?