29 May Foreign Currency in Oracle ERP Cloud – The Basics

Posted at 15:52h in Blog by Peter Care
Share

This post looks at the basics of how this works, for transactions and their resultant balances.

The balances for all accounts are held against a ledger. These balances are updated by financial transactions from all parts of ERP Cloud.

A single ledger stores balances for an organization or group of organizations that share the same Functional Currency, Accounting Calendar, Chart of Accounts and Accounting Method.

So each Ledger has a single ‘Functional Currency’, which is the prime reporting currency for the group of organizations. Oracle has the ability to set up additional reporting currencies, but we’re sticking to the basics here so we’ll leave that for another post.

A financial transaction is done in the context of a Ledger.

The transaction currency defaults to the Functional Currency of the Ledger, but you can change it to any currency you have enabled. If you do change it, the transaction is defined as Foreign Currency.

Examples of transactions include:

The conversion from Entered Currency to Functional Currency is done by Oracle using the following data fields:

* – The special rate type ‘User’ allows the user to enter their own exchange rate for the transaction.

For example, consider a supplier invoice for 100.00 UK pounds (GBP) to our US-based company whose Ledger is in US dollars (USD). The exchange rate stored in ERP Cloud between GBP and USD for rate type ‘Corporate’ and the accounting date of the invoice is 1.22. Then the invoice amount would be stored twice in two separate fields:

Accounting and Transfer to GL

When Foreign Currency transactions are transferred from a sub-ledger to the GL, they are created as journals in GL.

These journals are in the Entered Currency of the transaction, with the Functional Currency equivalent stored against each line (debit or credit).

The below shows an example from Receivables

Note that the conversion rate is not stored on the journal header and the Conversion Rate Type is set to ‘User’. This is because a single journal from the sub-ledger could include multiple transactions using different exchange rates, so instead the Functional amount is stored on each line.

By contrast, a manually entered journal will use a default exchange rate type so that the rate held in the system is brought into the header and used for all lines. 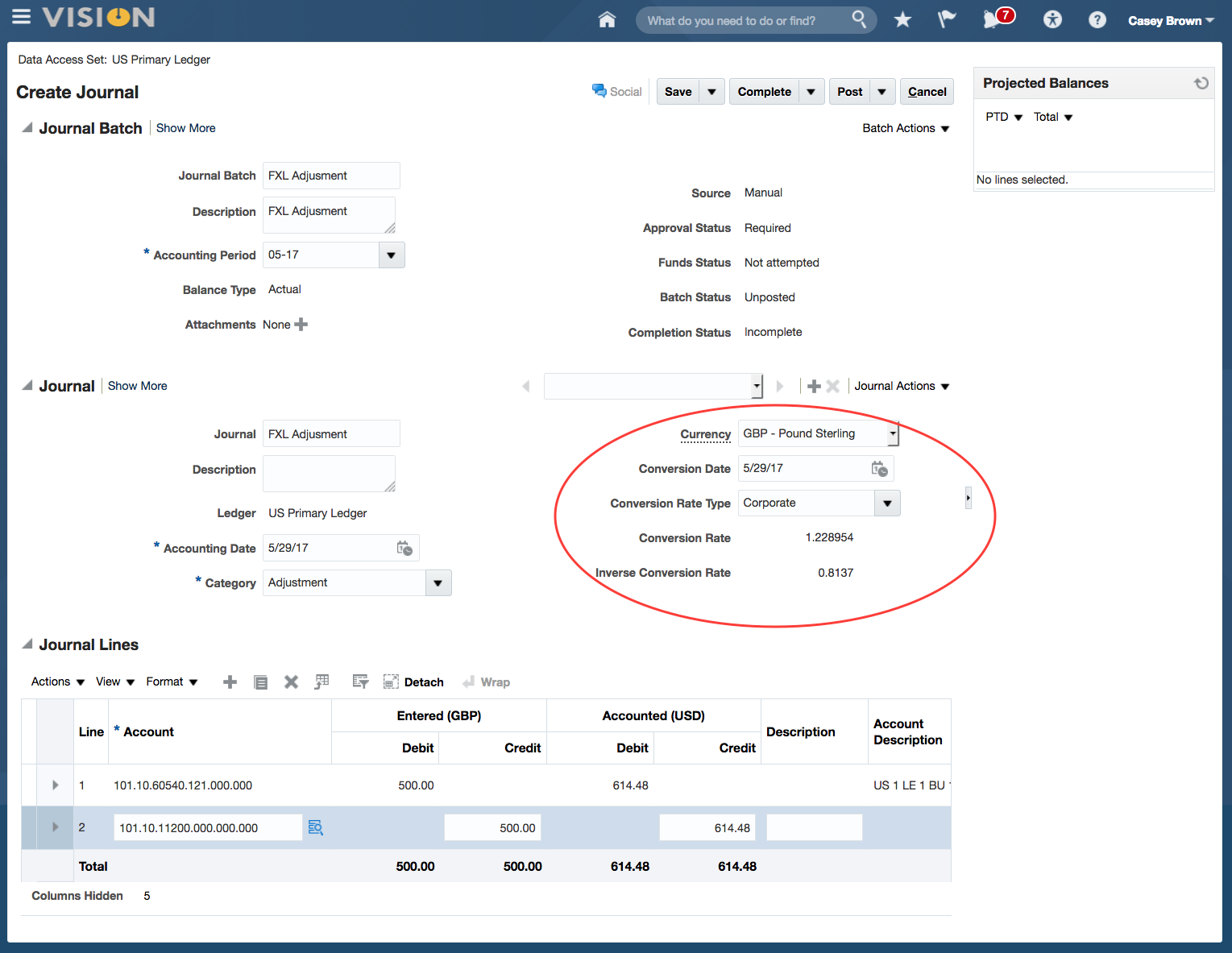 When journals are posted, they update the account balances.

Our example invoice would update the following two balances of the supplier liability account for the period of the transactions:

When inquiring on balances, you can view the Total balance, in the Functional Currency of the ledger

or the Entered balance by currency, which shows both the Entered (Foreign) amount and the Functional equivalent